My prayer for this conference, and for all of you one by one, is that you will see and savor the supremacy of Christ…

—the supremacy of his deity, equal with God the Father in all his attributes—the radiance of his glory and the exact imprint of his nature, infinite, boundless in all his excellencies;

—the supremacy of his eternality that makes the mind of man explode with the unsearchable thought that Christ never had a beginning, but simply always was; sheer, absolute reality while all the universe is fragile, contingent, like a shadow by comparison to his all-defining, ever-existing substance;

—the supremacy of his never-changing constancy in all his virtues and all his character and all his commitments—the same yesterday, today, and forever;

—the supremacy of his knowledge that makes the Library of Congress look like a matchbox, and all the information on the Internet look like a little 1940’s farmers almanac, and quantum physics—and everything Stephen Hawking ever dreamed—seem like a first-grade reader;

—the supremacy of his wisdom that has never been perplexed by any complication and can never be counseled the wisest of men;

—the supremacy of his authority over heaven and earth and hell, without whose permission no man and no demon can move one inch, who changes times and seasons, removes kings and sets up kings; does according to his will among the host of heaven and among the inhabitants of the earth; so none can stay his hand or say to him, “What have you done?”

—the supremacy of his providence without which not a single bird falls to the ground in the furthest reaches of the Amazon forest, or a single hair of any head turns black or white;

—the supremacy of his word that moment by moment upholds the universe and holds in being all the molecules and atoms and subatomic world we have never yet dreamed of;

—the supremacy of his power to walk on water, cleanse lepers and heal the lame, open the eyes of the blind, cause the deaf to hear and storms to cease and the dead to rise, with a single word, or even a thought;

—the supremacy of his purity never to sin, or to have one millisecond of a bad attitude or an evil, lustful thought;

—the supremacy of his trustworthiness never to break his word or let one promise fall to the ground;

—the supremacy of his justice to render in due time all moral accounts in the universe settled either on the cross or in hell;

—the supremacy of his patience to endure our dullness for decade after decade; and to hold back his final judgment on this land and on the world, that many might repent;

—the supremacy of his sovereign, servant obedience to keep his Father’s commandments perfectly and then embrace the excruciating pain of the cross willingly;

—the supremacy of his meekness and lowliness and tenderness that will not break a bruised reed or quench a smoldering wick;

—the supremacy of his wrath that will one day explode against this world with such fierceness that people will call out for the rocks and the mountains to crush them rather than face the wrath of the Lamb;

—the supremacy of his grace that gives life to spiritually dead rebels and wakens faith in hell-bound haters of God, and justifies the ungodly with his own righteousness;

—the supremacy of his love that willingly dies for us even while we were sinners and frees us for the ever-increasing joy in making much of him forever;

—the supremacy of his own inexhaustible gladness in the fellowship of the Trinity, the infinite power and energy that gave rise to all the universe and will one day be the inheritance of every struggling saint;

And if he would grant us to know him like this, it would be but the outskirts of his supremacy. Time would fail to speak of the supremacy of his severity, and invincibility, and dignity, and simplicity, and complexity, and resoluteness, and calmness, and depth, and courage. If there is anything admirable, if there is anything worthy of praise anywhere in the universe, it is summed up supremely in Jesus Christ.

He is supreme in every admirable way over everything:

As Abraham Kuyper used to say,

“There is not a square inch in the whole domain of our human existence over which Christ, who is Sovereign over all, does not cry, ‘Mine!’”

And rule with absolute supremacy. And though it may not seem so now, it is only a matter of time until he is revealed from heaven in flaming fire to give relief to those who trust him and righteous vengeance on those who don’t.

Oh, that the almighty God would help us see and savor the supremacy of his Son. Give yourself to this. Study this. Cultivate this passion. Eat and drink and sleep this quest to know the supremacy of Christ. Pray for God to show you these things in his Word. Swim in the Bible every day. Use the means of grace. Like God-centered, Christ-exalting books. Don’t go home without books to help you in this.

The Main Obstacle to Knowing the Supremacy of Christ

So here we are as sinners. We don’t know him, we don’t trust him and treasure him the way he deserves. So what stands in the way?

The biblical answer to that question is: the absolutely just and holy wrath of God. We cannot know God in our sin because the wrath of God rests on us in our sin. What we deserve in our sin is not the knowledge of God, but the judgment of God. And since we are cut off from the knowledge of God by the wrath of God, we are cut off from sexual purity and holiness. God doesn’t owe us purity, he owes us punishment. Therefore we are hopelessly depraved and hopelessly condemned.

Except for one thing: the good news that Christ has become for us the curse to bear God’s wrath and the righteousness to meet God’s demand. This is the heart of the gospel. But here it is for everyone who believes: Galatians 3:13, “Christ redeemed us from the curse of the law by becoming a curse for us—for it is written, ‘Cursed is everyone who is hanged on a tree.’” We were under the curse of God’s wrath. But Christ became a curse for us. God’s demand was that we be perfect. We cannot, in our sin, fulfill this demand. But Christ has. And by faith in him that perfect righteousness is imputed to us.

Therefore, since it is true that Christ has absorbed all the wrath of God that was aimed at me, and since it is true that Christ has performed the perfect righteousness that God demands of me, there is now for me no condemnation. Instead every thought of God and every act of God toward me in Christ Jesus is mercy. The way is open to know him and all the beautiful supremacy of his Son. The cross of Christ has made the supremacy of Christ knowable.

The best gift of the gospel is seeing and savoring the supremacy of Christ himself. 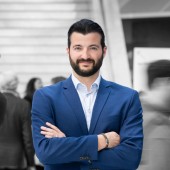